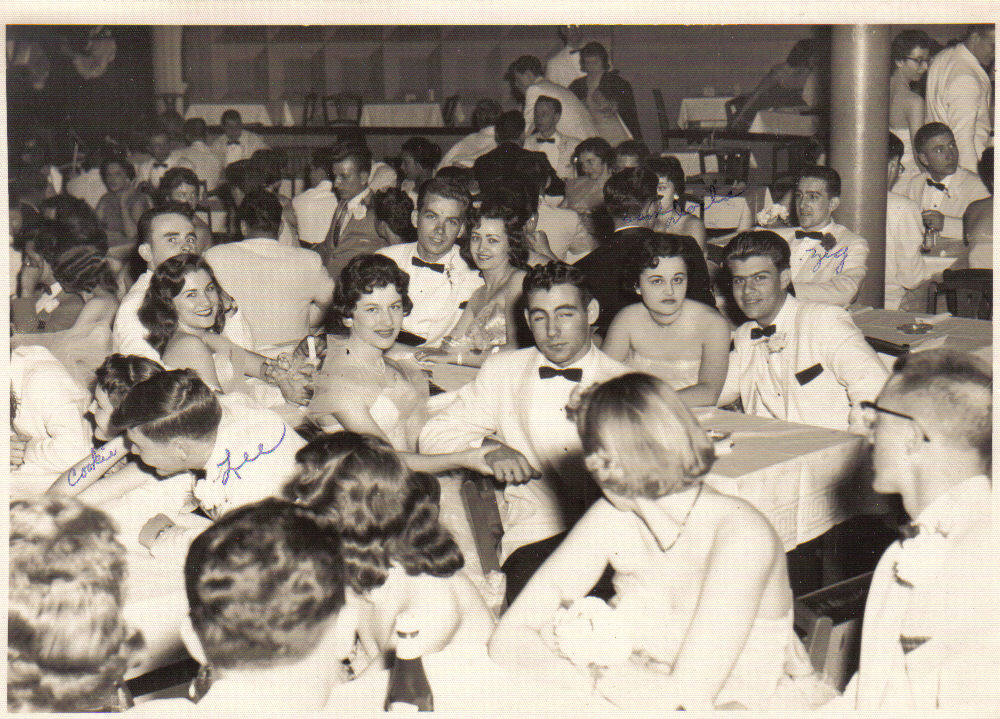 Originally appearing in stories in The Valley Independent and the Mon Valley edition of the Tribune-Review. 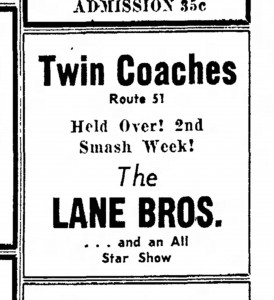 Ron P did some research in answer to my question “Who played at our prom”.
.
1) The Temptations could not have been at your post-Prom party at the Twin Coaches in 1958.
They did not come into being until 1960 and were known by various names (Primes, Elgins, Pirates) before a combination of singers from those groups became the Temptations and had their first hit in 1964. The third attachment above shows that the Lane Brothers were being held over at the Coaches for the second week on the night of your prom.
A story in the May 9, 1958 edition of the Uniontown Morning Herald touted a Fashion Show sponsored by a Uniontown women’s club that night at the Twin Coaches and listed the Lane Brothers as the entertainment.

2) The other attachments also are from The Daily Republican and call attention to the 1958 Junior-Senior Prom at Monongahela High School.
Couldn’t find anything in the way of a post-Prom story or photo after the event.

3) As for crediting the material on the Twin Coaches, perhaps you can just say it originally appeared in stories in The Valley Independent and the Mon Valley edition of the Tribune-Review.

What acts headlined at the Coaches?  This may surprise you.

=======================================
Dean Martin (without Jerry Lewis) – He began a nine-day engagement there
on May 31, 1957 and the place was packed every night. Martin also drew
large crowds to the golf driving range across Route 51 from the Coaches
as he went there to drive balls between his shows at the club.
Liberace – He was magnificent. He had a gimmick of having people from
the audience come on stage to dance (polkas) with him. Guess who
he picked the night I was there? Yep, me. He twirled me around the
stage and sighed, “Oooh, you’re so strong.”

Jack Jones – He was dating actress Jill St. John at the time and she
sat at a table in the back of the dining area for every show. No one
bothered her, however – mainly because of the obvious bodyguards
seated at the next table.

The Kossol Sisters – They comprised a singing trio from Charleroi and were
good enough to play the clubs in the Pittsburgh area. A funny line appeared
about them in The Charleroi Mail when they shared the bill with singer
Frank Marvin. The hype said the Kossol Sisters “are coming to the Twin
Coaches direct from a one-night stand with Frank Marvin in Pittsburgh – an
experience they won’t soon forget.”
Comedy team of Sheldon and Weldon
Simpson’s Humanettes (puppet act)
Dancers Alfred and Lenora
Singer Dean Parker
Comedy Trio of Bimbo, Bambo and Plumbo
Dance Team of Howard and Helene
Dance Team of Mario and Flora

Among the top political figures to speak at banquets, etc. at
the Twin Coaches were former President Harry S Truman (10/9/56),
John F. Kennedy (during his campaign for president) and Hubert Humphries.
There are far too many others to mention but they included
governors, U.S. senators and representatives. Al Gore’s father was among that group.
Corporate leaders also spoke there as part of banquets and celebrations of chambers of commerce.

And of course there were the sports figures, most of whom were at the Mon Valley Football Conference. Again, too many to mention but the list did include Frank Leahy, The Four
Horsemen and Pitt’s Dream Backfield on the same night, Paul Hornung, Jesse Owens, Woody Hayes, Paul Dietzel, Buddy Parker, Danny Murtaugh, Stan Musial, Curt Gowdy, Bert Rechichar, Red Grange, Vince Lombardi.
The list goes on and on and on.
John Bunardzya scored a scoop of sorts when he booked Ara Parseghian in his first year at Notre Dame. Ara was booked way in advance of the start of the season and
was making his first public speaking appearance when he came to the Twin Coaches.
Woody Hayes was an interesting character. I was working at the Patriot-News in Harrisburg at the time and Woody had a kid from Harrisburg named Art “Buster” Ray (also known as “Death” Ray) – great running back. The Pat-News asked me
to interview Hayes for quotes about Ray and his former high school coach, George Chaump, who was an assistant at Ohio State. Woody was very cordial and said he would give me 10 minutes. He then invited me to sit down on the piano bench on stage
and proceeded to play several songs while we talked.
Terry Bradshaw also was a featured speaker after his rookie season with the Steelers. That was at the time when Rose Calderone was presenting Little Theatre at the Coaches, so
the stage was not available for the head table, etc. The guests and speakers sat at tables in front of the stage, which was adorned with scenery for Man of La Mancha.
Fire destroyed Twin Coaches in 1977
It was  – Monday, October 10, 1977 – that fire destroyed one of western Pennsylvania’s most notable landmarks, the Twin Coaches supper club on Route 51 in Rostraver Township.
The fire, described by The Valley Independent as “a roaring inferno, whipped by 20-mile-an-hour winds,” broke out shortly after 1 a.m. and was burning out of control when the first of 26 pieces of fire fighting equipment arrived on the scene minutes after the initial alarm was sounded at 1:15 a.m.
Rostraver Central Volunteer Fire Department was the first unit to reach the site. Captain Harve Anderson of that department told reporter Fred Hevia the entire center of the building was burning out of control when he arrived.
“It resembled a huge bonfire,” Anderson said.
In addition to Rostraver Central, other companies responding to the fire were Monessen, North Belle Vernon, West Newton, Washington Township, Belle Vernon, Webster, Collinsburg, Turkeytown, West Point, Midway-St. Clair, South West Greensburg, south Greensburg, Greensburg, New Stanton, Youngwood, Yukon and Mount Pleasant. More than 250 firemen with 26 pieces of equipment circled the building and blocked traffic on Route 51 by 2 a.m.
Charleroi and Lock Four fire companies were on standby and State Police and Rostraver Township police did yeoman’s work in directing traffic on Route 51 and Interstate 70, both of which were jammed with curious spectators.
The Salvation Army also responded with its mobile canteen to provide refreshments for the firemen and other emergency crews.
Anderson told Hevia fireman had more than four miles of hose pumping thousands of gallons of water into the burning structure in hopes of saving a portion of the 33-year-old club. But one unidentified firefighter said, “We knew we didn’t have a chance to save it.”
Flames from the fire, which could be seen for several miles, raced through the interior of the Twin Coaches including false ceilings and turned the structure into “an inferno,” the newspaper said.
Firemen connected hoses to water hydrants as far as a half-mile from the coaches and also into a stream which runs along Route 51. By 5 a.m., firemen were still pumping water into the building, even though it had been destroyed.
There were no serious injuries reported.
Rostraver Central firemen were called back to the scene at 5:30 p.m. that day when embers ignited some of the woodwork again.

Trooper Donald Frenz, State Police fire marshal at the Belle Vernon station, discounted unofficial reports that damage could run as high as $1 million. He told The Valley Independent the day after the fire it “probably will be closer to $750,000, considering how old the structure was.” Frenz was conducting his investigation with the assistance of the Central, Webster and Collinsburg companies of Rostraver Township, who were among the first to reach the scene.

Ironically, the fire began at the start of Fire Prevention Week and was the second blaze in about 13 hours at the nationally known supper club.

Firefighters from Rostraver Central and four other companies rushed to the scene just after 4 p.m. on Sunday, October 9 to extinguish a minor fire. A fire official told The Valley Independent only some linen store near a hot water tank had caught fire. This fire, Anderson said, caused no damage and was not related to the destructive blaze which swept through the Twin Coaches in the early morning of October 10.

The alarm on Sunday, however, did force cancellation of shows by Sammy Davis Jr.
Hevia also recalled that another serious fire in the kitchen damaged the supper club three years earlier during a performance by Bobby Vinton. Damages were estimated at $60,000.
“About 800 steak and lobster dinners were destroyed,” Hevia wrote of the 1974 incident. “But the Bobby Vinton show went on as scheduled.”
The Twin Coaches was owned and operated by Bob Calderone at the time of the 1977 fire. He was a nephew of Tony and Rose Calderone, who launched the business in 1944. Under their direction the Twin Coaches grew in size and reputation and showcased most of the top names in entertainment and was considered a “must venue” for national stars for many years. The site also was home to major political banquets and among those featured at such affairs were President Harry S Truman, President John F. Kennedy, who was still a U.S. Senator when he visited, and former Vice President Hubert H. Humphrey.
Tony Calderone was only 44 when he died March 13, 1960. His wife Rose continued to operate the club until 1973 when she sold it to four of Tony’s nephews including Robert, who later purchased the night spot and was the sole owner.
In addition to destroying one of the country’s top night clubs, the fire in 1977 also had a big impact on a number of banquets and similar events including the Big 10 (Mon Valley) Football Conference banquet scheduled for December 15, a fall rally of the Washington County Democrats on October 22 and the 75th anniversary celebration of St. Dominic Catholic Church in Donora scheduled for November. Those events were relocated and held as scheduled.